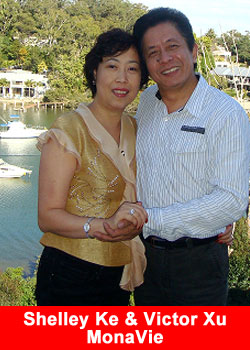 Shelley Ke and Victor Xu are one of the fastest rising stars in the MonaVie Network marketing business. Nothing has prevented this couple from ensuring that they are at the top of their multi-level marketing game!

Yes, not even their geographical location has killed their dream of making them one of the top MLM earners in MonaVie.

Even though they have only been with MonaVie for a few years, nothing has intimidated them in their journey of being among the best MLM couple. And these are the type of people I personally call real champions in the world of entrepreneurship!

The couple is highly celebrated in MonaVie because they have achieved a lot of success within a very short period of time, considering they never even knew the meaning of term multi-level marketing when they registered themselves in the business.

Shelley Ke and Victor Xu are a highly respected and rich multi-millionaires family. The Sydney, Australia based couple have turned their lives around from being busy jewelry shop entrepreneurs to becoming the healthy and relaxed MonaVie Network marketing stars that are the envy of many entrepreneurs today.

The couple has earned all the basic awards in MonaVie and they are still fired up in their multi-level marketing business like never before.

When I say this couple rakes in millions, just know I mean it!

Just imagine a family making a passive income of $210,000 per month and over $2,520,000 per year, while relaxed in a certain corner of the world, waiting for their bank accounts to swell!

Is this not what all of us need in today and forever in life?

I wish you would read on to know where they have come from!

Shelley Ke was born, raised, and educated in the Republic of China. She grew up together with her three sisters. Her father was a scientist by profession, while her mother was a teacher.

Shelley Ke grew up in a very warm environment because their parents gave them all they had to make sure they are happy. They loved them and worked hard to ensure they make them comfortable in their civil service lifestyle.

Victor Xu met Shelley Ke in China where they eventually got married. Shelley Ke and Victor Xu later moved to Australia in early 1988, to look for greener pasture, if you know what I mean!

They are now blessed with two children, a boy and a girl.

In Australia, they built their home and jewelry business. Shelley Ke had a passion for jewelry that led them to start a jewelry store business. They were very dedicated and spent most of their time building this business until they ended up having 31 jewelry stores.

They eventually emerged to be very success in traditional business, owning the biggest franchise stores in Australia, just imagine!

Shelley Ke opened one jewelry store every three months. Shelley Ke would go into the field, do market research on a new place to open her business, go through the legal processes to acquire a lease, and then design the shop before opening it. She hints that the whole process cost her over 200,000 Australian dollars.

So the family was not poor in my opinion!

But suffice it to say, they worked for what they had!

Yes, the family was doing well but there was a problem.

They were very time poor. 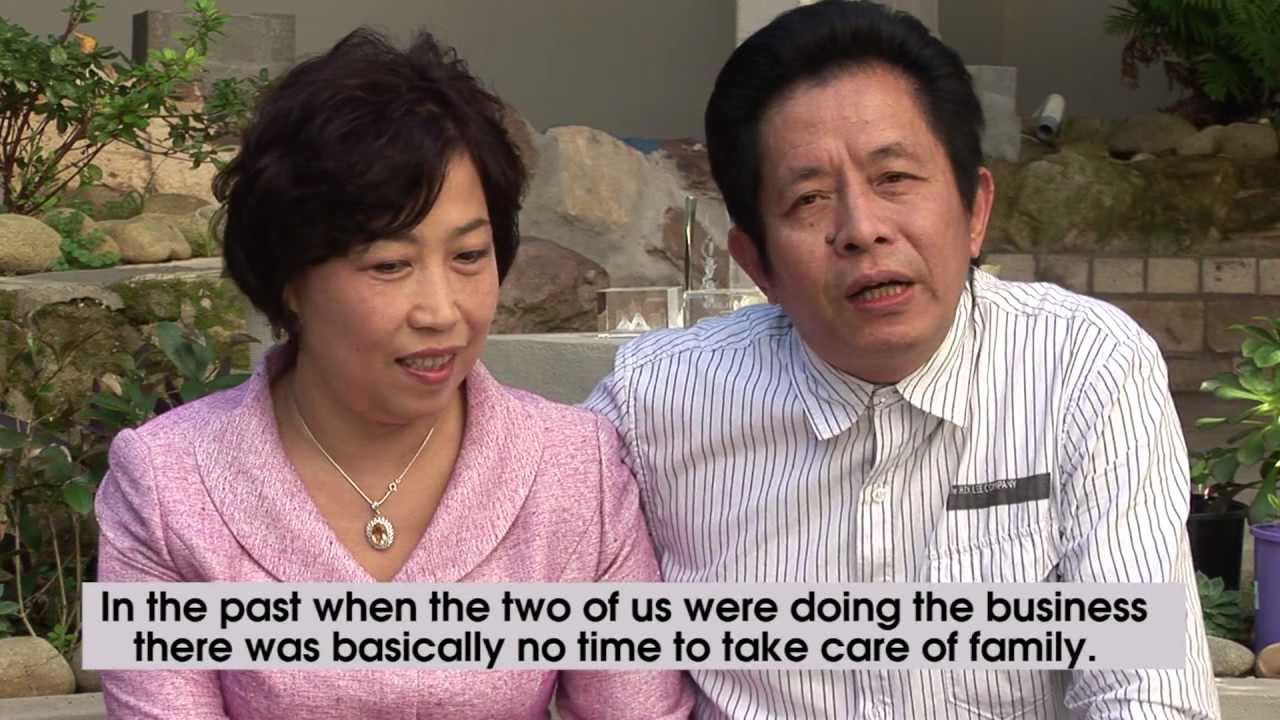 Boy, do I know THAT pain!

They had very little time to spend with their two children.

In fact, they had to employ a nanny to take care of them as they were mostly out managing their jewelry stores. Shelley Ke had only a little more time with her kids than her husband, Victor Xu who totally had no time to be with his family.

They eventually sold their businesses before the financial crisis hit Australia and started investing in real estate.

In 2009, one of Shelley Ke’s real Estate friends visited her and gave her the Mona Vie concept as they had a chat. Shelley Ke was very interested in the business opportunity. It was similar to what she was doing in her jewelry franchise, but different in that it seemed to have an exponential growth opportunity.

Shelley Ke immediately requested her sister to book an appointment with a lady who was involved in Mona Vie, and she actually had to drive for about 50 minutes the same day to just go and meet her.

And that is how she finally found herself and her husband in MonaVie where they had had tremendous success.

Now, How Successful are Shelley Ke and Victor Xu in MonaVie?

Shelley Ke and Victor Xu from Sydney, Australia, have broken all records under them to become the Top most MonaVie distributors in the Southern Hemisphere. It just took them two and half years to achieve the highly coveted Presidential Black Diamond Executive award in December 2012. They have achieved this in spite of having zero experience in multi-level marketing.

Having achieved this new status in the MonaVie network marketing business, Shelley Ke and Victor Xu were awarded a bonus of 360,000 Australian dollars on top of the Black Diamond Award.

Shelley and Victor have had incredible success in the Mona Vie network marketing business since they joined the business in January 2009.

This family likes pulling surprises, considering that they achieved the rank of the Purple Diamond on the last day of 2010, before becoming Black Diamonds in 2011.

2012 was the family’s year of excellence, as they managed to get a Royal Black diamond in April, 2012 that came with a bonus check of 120,000 Australian dollars. They later given started a new year, 2013 with a presidential Black Diamond that they achieved on the eve of Christmas celebrations.

When Shelley Ke was asked how she chose MonaVie, she responded by saying that she first studied MonaVie’s compensation plan. She was amazed at MonaVie’s Solid Business model and the unique concept surrounding the MonaVie Compensation Plan.

Being the already entrepreneur she was, her mind was able to see the potential.

Shelley therefore felt dedicated to succeed from the first day she joined MonaVie and she was fully prepared and committed to working hard.

Shelley Ke adds that she enjoys MonaVie because they offer a timeless product that anybody can use to achieve a healthy life.  She says that being in MonaVie has made her feel that everything can be achieved in the world. Whether it is financial freedom or good health, she is sure anybody can achieve that in MonaVie.

Shelley Ke and Victor Xu are a source of inspiration and encouragement in network marketing business. Their consistent and persistent attitude shows that everything is possible no matter the business opportunity you will be investing in. The couple says that you should never give up no matter the challenges you go through, and always avoid making excuses. Always remember that to be successful you have to work hard, but your life will be harder if you do not work hard.

Shelley Ke and Victor Xu say that MonaVie is the system to follow if you want to achieve good health and financial freedom.  And the only secret to achieve this is by working very close with your active up line. Shelley Ke says that all you have to do is enroll in MonaVie, have the right attitude and you will be set to go.

Shelley says that success in MonaVie is all about setting goals. Shelley Ke and Victor Xu understand that people want good health and wealth. So this is the major network marketing strategy she uses in her MonaVie organization. 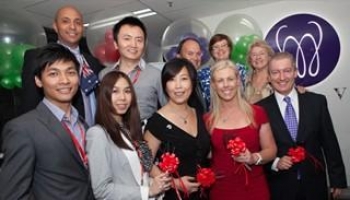 Shelley Ke is a very ambitious and focused wife, parent and multi-millionaire business lady. She joined MonaVie when everybody thought the MonaVie market was saturated but was able to create achieve a lot of success in the business. She even jumped some of her mentors to being the first couple from the Southern Hemisphere to achieve the Presidential Black diamond, all the way from Australia.

Shelley KE and Victor Xu have won many awards and accolades. The couple achieved Gold Executive within six weeks in the business, Ruby within Six months of enrollment, Blue Diamond in just 12 months and it took them less than 2 years to achieve the coveted Hawaiian Blue Diamond. The family finally surprised many by achieving the Presidential Black Diamond award after just two and half years.

Shelly Ke is finally happy in her life.

MonaVie has not only given her financial freedom but also time freedom.

She now lives in good health and she is excited that her husband is now at home with them full time. Shelley Ke and Victor Xu are happy to have all the time in the world with their children.

Shelley Ke is looking forward for more people to join them in MonaVie network marketing, a business for wonderful financial opportunities, good health and freedom with your time.

Shelley and Victor are now free people thanks to the MonaVie Network marketing company.

Would you consider yourself TIME poor, MONEY poor, or BOTH?

Tell me all about it!