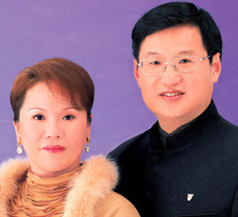 Success always follows ambitious and hardworking people no matter where they are!

You and I are obviously familiar with this statement, and I don’t plan to bore you with more of this any way. .

I do however know a number of entrepreneurs and millionaires out there who will exude mixed feelings by the mention of our simple statement. One of the best examples of these groups is the multi-level marketing entrepreneurs.

Yes! You read that right!

Majority of multi-level marketing millionaires have risen from nothing to becoming world leaders in business out of passion, hard work and ambitions. Although this is true to majority of mlm super stars, none of it can be compared to the life, experience, and success of Mark Lei and Peggy Yeh from Amway.

In terms of success, yes, they are a success story and ready to be counted not only as Amway global millionaires, but also as the most influential couple in the world of multi-level marketing.

Everything they touch simply turns into a success story!

The most interesting thing about this couple is that they achieve uniform results in each and every country they start a multi-level marketing venture!

Continue reading to understand what they do to bring about all this consistency.

I am bringing their inspirational story to you today, because I thought I should give you something that you or I can inspire you as you plan to begin or expand your entrepreneurial spirit of investment. Mark Lei and Peggy Yeh have been able to achieve a fortune in multi-level marketing, and I am sure their humble journey to fame and richness will blow away your mind!

As if that is not enough, they are well known names in the world of entrepreneurship and have a sweet success story in multi-level marketing.

Mark Lei & Peggy Yeh are also a well-respected couple in Amway and are in the top ten list of Amway top earners and independent product distributors. Along with some of Amway’s other top earners like Dexter & Birdie Yager, Barry Chi & Holly Chen, Foo Howe Kean & Jenny Ko, Sunny Hsu & Debra Hsieh, and Nancy Dornan – just to name a few.  The family is also in the top 50 of top earners in the multi-level marketing worldwide.

Do you want to know how they started their business and what made them this successful?

Mark Lei was born in a remote village of Taiwan, in a family of four. Mark Lei’s life has revolved around Taiwan in the whole of his childhood. He was born, raised, educated and married in Taiwan. Mark Lei got married to Peggy Yeh, who was also born, raised, and educated in Taiwan.

Mark Lei grew up in a very poor background!

I have, in fact, read and written many humbling stories of several multi-level marketing millionaires who were not initially able to afford three meals a day, but none of it has been touching as that of Mark Lei.

The Amway USA millionaire you see today was so poor that skipping those meals was just a lifestyle in their family and part of everyday life as they knew it.

Mark says that he rarely used to see his mother because she was always busy working in the neighborhood as a maid so they can at least have one meal in a day!

They in fact reached a point where their family was forced to send some of them to go and live with other families, because feeding them was a big challenge.

Just imagine the level of poverty that can prompt you and your family members to make such a decision!

Mark Lei, however, never gave up, he fully understood that winners always take challenges positively and it paid off in the long run.  He was inspired by the hard time his family had went through and tried to do everything in his power to ensure his family’s life has improved.

Mark Lei and Peggy Yeh has since then continued to work so hard, even before entering the Amway USA multi-level marketing business.

It is however through the mlm business that he has significantly changed his life and that of his family.

Mark Lei and Peggy Yeh started their Amway multi-level marketing journey back in 1983.

What surprises me most is the fact that they have managed to be successful in mlm business in countries that majority of its population live below poverty line!

Let that sink in for a second!

Gone are the excuses here that “I can’t make any money because everyone is poor and they have no money to buy my products!”

Mark handled that objection and kept right on truckin’.

That is why I strongly believe that entrepreneurship is a science that needs a proper guidance for you to turn a profit in your business.

Mark Lei and Peggy Yeh were sponsored by Bai Jun Yi, but they surprisingly equaled and overtook their sponsor’s success in Amway Global within a very short period of time!  They believe that Amway is the best mlm business in the world, not because they are successful using their products but because of their exceptional health products and diet supplements.

The couple attributes their success to their hard work, persistence, and proper time management. They have used the law of attraction in their business model, which has, so far, proved to be very instrumental in helping them on their way to the top.

They believe that you can only attract successful people into your business by also being successful and possibly being above them.

The law of attraction has also worked effectively to majority of Amway Multi-level network entrepreneurs, according to the various Amway reviews online.

Mark Lie and Peggy Yeh are among the few highest rated product distributors in Amway Global.

They have a feeling that they are not yet where they want to be!

They look up to Bill Britt as their role model and believe they can achieve as much success as he has achieved over time.

Their trust in Amway has let them to give a deaf ear to all the fake mlm scam warnings and led them to living a life like no other.

My friends, the only way to be successful is to take constructive risks in business!

Getting Started in AmWay

They started their multi-level marketing in Taiwan, and built their business from scratch. Mark Lei and Peggy Yeh managed to triumph during the times when mlm scam advice and stories were scary and rampant.

There was no internet back then and they confess doing a lot of walking from one door to another, trying to sell the Amway products and recruit their down line.

The door to door method was so frustrating and embarrassing but they had no option.

I can relate to walking door to door to sell something. I did it with Kirby vacuum cleaners.

Not easy to have a door slammed in your face over and over again.

But oh how rewarding and good it felt when I sold one of those vacuum cleaners, knowing that I just helped someone make a fantastic decision for their home. I still use Kirby vacuum cleaners to this day and love them still!

Mark Lei recalls walking for over a week without even recruiting one individual in his down line.

What if this was you?

Would you continue distributing the Amway products?

My friend, this is the struggle that the majority of multi-level marketing millionaires you see today have went through!

Most of these millionaires WORKED hard for what they have and where they are today!

Mark Lie and Peggy Yeh also went through a hell of a lot of problems in starting their businesses in other countries such as China.

One of the major problems was the language barrier, which according to them was a nightmare in their lives. They worked hard in learning some of these languages and eventually became successful.

Some of the countries that Mark Lie and Peggy Yeh entered and left a permanent impact include Philippines, Singapore, China and India.

Despite all odds and objections – they succeeded!

Mark Lie came from a very humble background and clearly knows what it is like to be poor. He swore to make a business out of Amway USA and surely he did it.

Mark Lie always knew that he would have not done all that was done if it were not for his beloved wife, Peggy Yeh. She has been patient with him and always worked hard to ensure they get the best out of their business.

Many Amway reviews have voted Amway multi-level marketing company to be among the most trusted mlm company in the globe. These Amway reviews have also voted Mr. Bill Britt to be one of the most followed entrepreneurs not only in Amway USA but also in all other parts of the world.

Mr. Mark Lei and Peggy Yeh are often grateful to God for leading them to Amway multi-level marketing.

According to the couple, Amway Global is the most trusted mlm company and has the most lucrative compensation plans in the mlm business world.

Various Amway reviews and mlm scam advisers have, in most cases, been in agreement with these facts.

Mark Lei and Peggy Yeh have achieved the highest level success possible in the Amway multi-level marketing business. They have worked really hard and their hard work has surely paid off.

The couple is among the highest rated Amway global product distributors.

They are the members of the Founders Council from Taiwan and are one of the best all time multi-level marketing entrepreneurs according to Amway USA.

They are one of the few couples in the world who had defied thoughtless mlm scam advises and managed to make a life out of what they believe in.

Now, what Awards have they Achieved?

Mark Lie and Peggy Yeh had also expanded their mlm businesses into a number of countries in Asian Continent. As a result, they have achieved tremendous success, differently in each and every country.

The couple had won majority of their awards in Taiwan, which is their mother country. Some of the awards they have won in Taiwan include:  Platinum award in 1984, Emerald and Pearl in 1989, EDC in 1993, Diamond in 1992, Double Diamond in 2001, crown and Crown Ambassador in 2002.

Mark Lie and Peggy Yeh however achieved their highest Award in 2004 when they were awarded the Founders Crown Ambassador 40 FAA.

Mark Lie and Peggy Yeh have also achieved the Founders Crown Ambassador in China, Executive Diamond in Philippines, an Emerald in Singapore and several Diamonds in India.

Mark Lie and Peggy Yeh deserve all the respect, millions, and honor they are given in the Amway Global entrepreneurship.  They have proved to the world that everything is possible and are ready to be counted as one of the success stories in Amway multi-level marketing.

Mark Lie and Peggy Yeh’s success is in fact compared to that of the Amway USA legend Bill Britt.

But in my opinion they are not far away from the achievements Bill Britt has achieved, mostly when we talk of their contribution to the entrepreneurship world.

Mark Lie and Peggy Yeh have done their part in building a business empire and achieving financial freedom!

Now it is our turn.